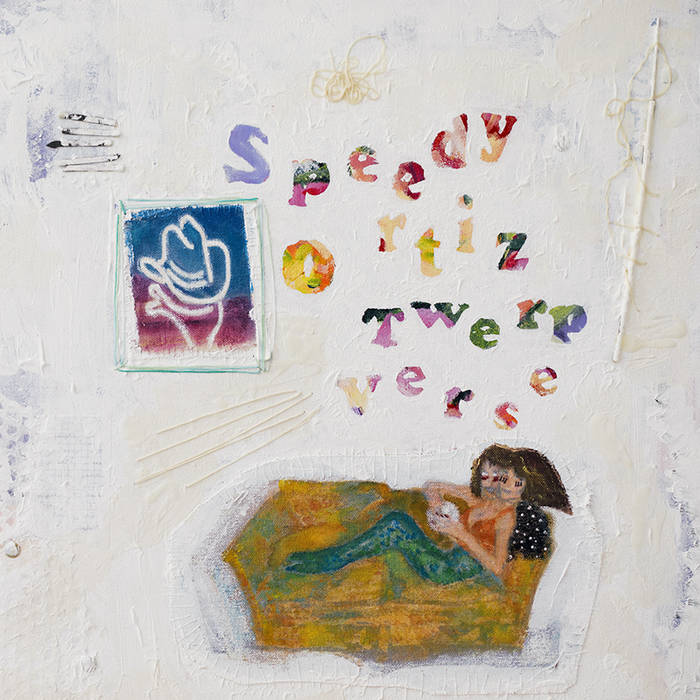 Mike D. initial worries of album not rocking were just worries. this is a great album. speedy is like a quirky, ealry liz phair. great stuff.

Pinedon I love the sound palette, so many colorful chunky glittery pieces and smooth licorice-thick nebulae swirling behind my eyes; strength through honesty reckoning with the absurd, clownish hell of our times--yet occasionally infused with genuine levity, if not celebration--reminds me of the best in the spirit of Ween. I love all the new kinds of sounds, synths and vocal layers, occasionally accompanied by those deep Speedy low riffs. Instantly one of my favorite records. Favorite track: Lucky 88.

Robert Stuart We are all fortunate that Speedy Ortiz is making music. This album continues their assent as masters of their instruments and song craft. I love the fuzzy and twangy fenders and Sadies’s voice is rich and luscious. Don’t forget the groove...solid bottom end. Tightly loose, sparkling clean dirt...with love this album will take off your head! Kills!!! Favorite track: Backslidin'.

"Necessary brattiness" is the motto in Speedy Ortiz’s dauntless new collection of songs, "Twerp Verse." The follow-up to 2015's "Foil Deer," the band's latest indie rock missive is prompted by a tidal wave of voices, no longer silent on the hurt they’ve endured from society's margins. But like many of these truth-tellers, songwriter, guitarist and singer Sadie Dupuis scales the careful line between what she calls being "outrageous and practical" in order to be heard at all.

"You need to employ a self-preservational sense of humor to speak truth in an increasingly baffling world," says Dupuis. "I call it a ‘twerp verse' when a musician guests on a track and says something totally outlandish – like a Lil Wayne verse – but it becomes the most crucial part. This record is our own twerp verse, for those instances when you desperately need to stand up and show your teeth.”

"Twerp Verse" was tracked in Brooklyn DIY space Silent Barn, mixed by Omaha legend Mike Mogis (Bright Eyes, Rilo Kiley) and mastered by Grammy-nominated engineer Emily Lazar (Sia, Haim, Beck). The record pulls from the most elastic pop moments in Squeeze's Argybargy and the seesawing synth-rock of Deerhoof and the Rentals. With Dupuis on guitars, vocals, and synths, supporting guitarist Andy Molholt (of psych pop outfit Laser Background) now joins Speedy veterans Darl Ferm on bass and Mike Falcone on drums – and together they accelerate the band's idiosyncrasy through the wilderness of Dupuis' heady reflections on sex, lies and audiotape.

Dupuis, who both earned an MFA in poetry and taught at UMass Amherst, propels the band's brain-teasing melodies with her serpentine wit. Inspired by the cutting observations of Eve Babitz, Aline Crumb's biting memoirs, and the acute humor of AstroPoet Dorothea Lasky, Dupuis craftily navigates the danger zone that is building intimacy and political allyship in 2018. Now as public pushback against the old guards reaches a fever pitch – in the White House, Hollywood and beyond – the band fires shots in disillusioned Gen Y theme "Lucky 88," and casts a side-eye towards suitors-turned-monsters in the cold-blooded single "Villain." Closing track "You Hate The Title" is a slinky traipse through the banality of this current moment in patriarchy – in which survivors are given the mic, but nitpicked over the timbre of their testimonies. "You hate the title, but you’re digging the song," Dupuis sings wryly, "You like it in theory, but it’s rubbing you wrong." Tuned smartly to the political opacity of the present, "Twerp Verse" rings clear as a bell.